The case of the death of Sarah Morley rests on two
sources: a newspaper report based on the inquest,
and an article in the British Medical Journal.

Norwich Mercury – Saturday 31 May 1902
(Comments are below the article)
page 8, column 7.
WOMAN BURNT TO DEATH
AT WILTON.

A painful sensation was caused in Wilton on
Saturday morning when it was discovered that a
woman had been burned to death in her house.
Mrs. Sarah Morley was the widow of the late Mr.
William Morley,and seems to have lived a most
unhappy life. She was strongly addicted to
drink. As several men were passing the house on
Saturday morning they noticed a peculiar smell,
but proceeded to their work without further in-
vestigation. P.-c. Barrett passing about 7.15 a.m.
noticed the windows and curtains were black, and
that the front room was full of smoke. He broke
a pane of glass and opened the window, and effected
an entrance. Some neighbours followed him up-
stairs, and there they discovered the body of the
woman so terribly burned as to to [sic] almost beyond
recognition. The news rapidly spread, and a
crowd gathered, the whole affair causing a most
painful impression. The Coroner was communi-
cated with, and an inquiry was held the same after-
noon. Mrs. Fred Brown stated that she went into
the house about eight o’clock the previous evening,
when deceased said felt pains in her body.
Witness was asked to get some gin, which she did.
Just before ten o’clock she went in again, and
found the deceased with candle reading a book.
P.-c. Barrett described the finding of the body.
Mark Johnson identified the body as that of his
sister-in-law. The foreman of the jury, Mr.
Henry Bell, remarked that it was a distressing
case, and there was certain amount of mystery
about it, for no one knew how the body was
burned. The jury returned a verdict “Found
burned, accelerated through drinking.”
The remains were interred in Wilton churchyard
on Monday afternoon, the Rector (Rev. J. Still)
officiating. Amongst those present were—Mr.
Fuller Rolfe (brother), Mrs. Mark Johnson, Mrs.
Harry Johnson (sisters), Mrs. Tuck and Miss
Rolfe (nieces). Mr. Mark Johnson, Mr. Harry
Johnson, Mr. Tuck, Mr. and Mrs. Watson, Mrs.
Hutt, Mrs. Smith, Mrs. Hicks, Mrs. Gates, &c.
The deceased was in her 73rd year.

Comments on this newspaper article:
The event happened in the night of Friday 23 May to
Saturday 24 May 1901.

Sarah Morley, was born Sarah Rolfe in 1830. She married
William Morley in 1881, after William’s second wife died in 1880.
Apparently it was her first marriage. The marriage was ‘by Licence’,
i.e. no banns were read.

Mrs. Fred Brown is Sarah A. Brown, a neighbor of Sarah Morley.

Sarah’s sisters at the funeral were Emily and Martha Matilda, married
to respectively the full cousins Mark and Harry Johnson. James and
Clarissa Watson were the local schoolteacher and his wife.

The census of 1901 lists Sarah’s house as having only four rooms.
The location was on Wilton Street (then the name of the street leading
from Hockwold to Wilton). For an impression of what her house might
have looked like, see the first photograph of ‘Hockwold in Sepia’. The
photograph dates from 1912.

The reference to the issue of August 12th is to an article
on page 345 that discussed a paper by John Knott in
American Medicine, April 22nd, 1905 on the subject of the
belief in spontaneous human combustion.

The author was Ernest George Archer, born 1848 in Feltwell,
and still practising medicine there in 1902.

SIR, – The article in the BRITISH MEDICAL JOURNAL of
August 12th on spontaneous combustion recalls to my mind a
case which occurred in my practice a year or two ago, which
in the olden time would certainly have been classed as one of
these cases, and which certainly presented many features
difficult of explanation. The facts were these:

An elderly woman, living in a small house by herself, very
intemperate, and a large consumer of spirits of all kinds, was
last seen alive in the evening, as was often her habit, reading
a magazine by candle light. The following morning early a
policeman passing noticed smoke issuing from the closed
shutters of the sitting-room window, and the house was
broken into. The upper part of the walls and the ceiling of
the room were much scorched, but the furniture in the room
was intact. No trace of the occupant was found at first,
but a small heap of black débris was noticed on the floor in
front of a chair, which was an iron one, and the chintz
cover of which was destroyed. I was sent for, and found this
small heap to consist of the broken calcined bones of a human
body. They were lying in a small pyramid, on top of which
lay the skull. All the bones were completely bleached and
brittle, every particle of soft tissue had been consumed. A
table covered with a baize cloth within 3 ft. of the remains
was not even scorched.

I was not called at the inquest held on this case, but the
jury were very much concerned as to the cause of death, and
from some remarks made to me by the foreman afterwards
there appeared to be a decided opinion that this was a case of
“spontaneous combustion.”

It seems probable that the woman’s clothes caught fire,
but how is one to account for the absolute cremation of a
body in the midst of a sitting room filled with furniture?
I may say the remains were seen with me by a brother practi-
tioner, and we were both agreed that several features of the
case were beyond comprehension. – I am, etc.,
Feltwell, Brandon, Aug. 16th. E. G. ARCHER, M.R.C.S. 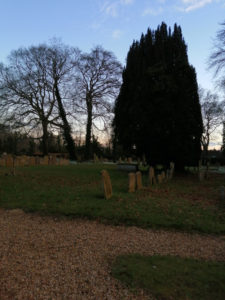 A case which seems to fulfil all the usual conditions of
spontaneous combustion was related in the medical papers some
months ago. An elderly, very intemperate woman, who lived
alone, was last observed alive reading a paper by candle light;
next morning smoke was seen issuing from the closed shutters
of her sitting-room. On breaking into the house, the upper
part of the walls and ceiling of the room were much scorched,
but the furniture was intact; at first no trace of the occupant
could be found, but a small heap of black debris was noticed
on the floor; this heap consisted of the broken calcined bones
of a human body, with the skull on the top. Every particle
of soft tissue of the body had disappeared, and yet a table
covered with a baize cloth within 3 feet of the remains was
unharmed. The jury were decidedly of the opinion that this
was a case of spontaneous combustion.

A typical instance of preternatural combustibility is related
by Archer [footnote] An elderly woman of very intemperate habits, who was a large
consumer of spirits of all kinds, lived alone in a small house. One morning,
smoke was seen issuing from the closed shutters of her sitting-room, and,
on breaking into the house, a small pyramidal heap of broken, calcined human
bones, on the top of which was a skull, was found on the floor in front of a chair
All the bones were completely bleached and brittle, every particle of soft
tissue had been consumed, and yet a table covered with a baize cloth, within
three feet of the remains, was not even scorched; the rest of the furniture in
the room was also intact. It is significant that the ceiling and the upper part
of the walls of the room were scorched, evidently the result of flame.
Footnote: Brit. Med. Journ. 1905.

… See Dr. Dixon Mann’s Forensic Medicine and Toxicology (edition of 1922)
p. 216). Here, cases are told of and are accepted as veritable – such as
the case of a woman, consumed so by fire that on the floor of her room
there was only a pile of calcined bones left of her. The fire, if in an
ordinary sense it was fire, must have been of the intensity of a furnace:
but a table cloth, only three feet from the pile of cinders, was unscorched.

This 1931 edition of Lo! was further annotated (1997) by X, see
http://www.resologist.net/loei.htm
X adds footnotes to both Mann and Archer.

However, in 1976 Michael Harrison published Fire from Heaven, in which he
expanded this Fort story into a 630 word horror story (starting on page 61) about a Mrs. Euphemia Johnson (68)
in Sydenham (London) in 1922 who was instantly turned into ashes after a sip of freshly
made tea, without her clothes being damaged at all. Needless to say, no such Euphemia
Johnson existed (courtesy Matt Mills). Harrison merely quotes Fort as follows.

“consumed so by fire that on the floor of her room
there was only a pile of calcinated bones … . The fire, if in an
ordinary sense it was fire, must have been of the intensity of a fur-
nace …” (Harrison’s quotation marks, ellipses and italics, note ‘calcinated’
instead of ‘calcined’).

Note that Harrison’s date derives from Fort, without considering that a
1922 handbook might not describe a case of 1922.

The Hockwold Village Magazine of April 2021 carries a short
article on this subject on page 12.